a) Pass an order/direction directing Respondent No.4 UPSC not to act or convene a DPC based on its affidavit dated 19.1.2012 filed before CAT , New Delhi in C.P.No.217 of 2005   in O.A.No. 399/2001 and on the basis of letter dated 06.03.2012 sent by DOP&T to UPSC in so far as it may involve reopening the regularization and relevant seniority  of staff artists and such promotions which have been duly affected by the judgment of  the Hon'ble Supreme Court.

b) Pass such order or further order or orders as this Hon'ble Court may deem fit and proper in the circumstances of the case.

a) Pass an order/direction directing Respondent No.4 UPSC not to act or convene a DPC based on its letter dated 20.03.2013 sent to the Ministry of I&B in so far as it may involve reopening the date of regularisation and relevant seniority of staff artists and such promotions which are in tune and in terms of the judgment of the Hon'ble Supreme Court.

b) Pass such order or further order or orders as this Hon'ble Court may deem fit and proper in the circumstances of the case.

UPON hearing counsel the Court made the following

2. The Supreme Court order dismissing the staff artists  prayer also reaffirms that "any order passed by UPSC shall remain"....

Thus the Supreme Court has declared that   not only the UPSC letter dated 20.3.2013  which the staff artists had prayed to quash  (posted on the blog) is upheld , but any  previous clarifications/order  made by UPSC,  such as UPSC Secretary's affidavit  with DOPT advisory etc also remains (i.e is upheld/ to be followed ).

3.  subject to the  ultimate outcome of this appeal ...
This means that the Supreme Court has  directed that the  UPSC may go along with the action proposed in its letter dated 20.3.2013 regarding conduct of review DPC for the period 1990  onwards  by
a) refusing contract service
b)  strictly going by date of screening into the grade of PEX by UPSC
c)  removing those not screened from eligibility list etc ....

The above action  would be ultimately subject to any decisons/additional directions/observations  etc that the supreme court may make during the course of the Ashraf Lone Review DPC for the  previous period  i.e 1982- 1989 (before IBPS) .

2. "PSA  manipulation of facts  and lies  completely ignored  and   controverted  point by point  by  UPSC in communication to Ministry " .

3. Supreme Court has directed  UPSC  go ahead with the review DPC to JTS Production of the IBPS.   (See PSA  misrepresentation and lies in the below given  letter  and The UPSC"s rebuttal) 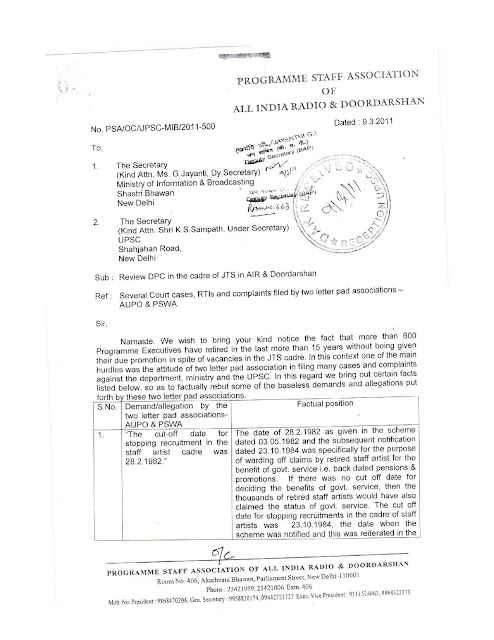 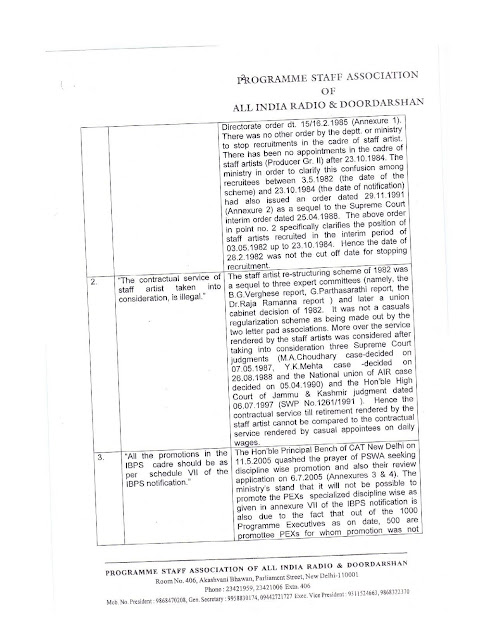 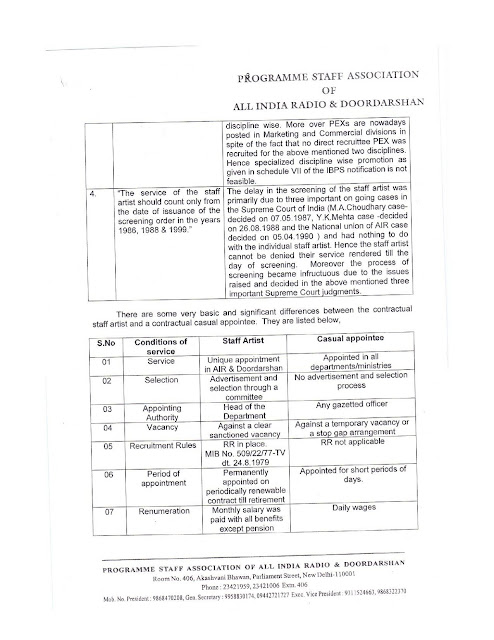 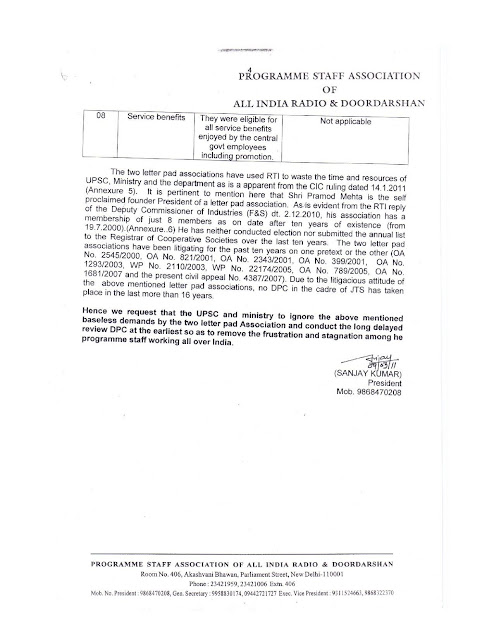 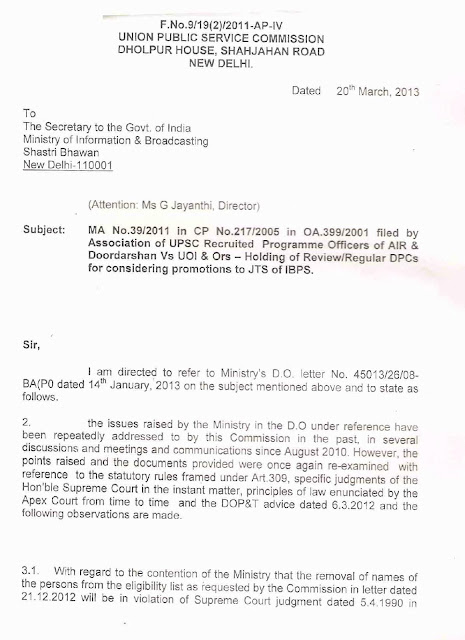 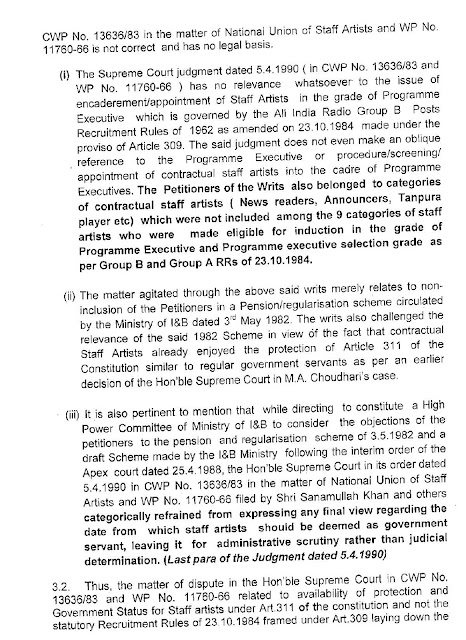 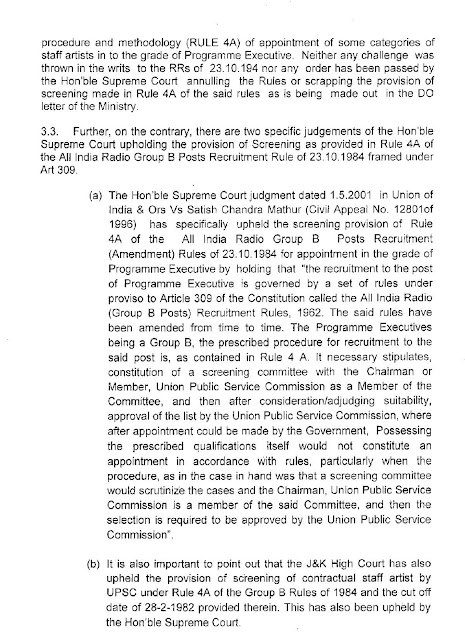 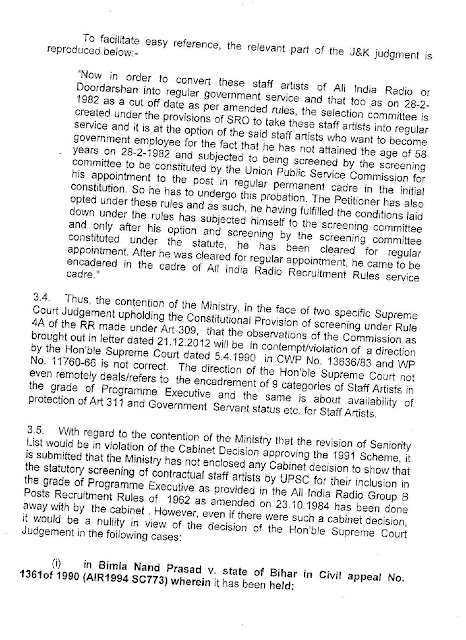 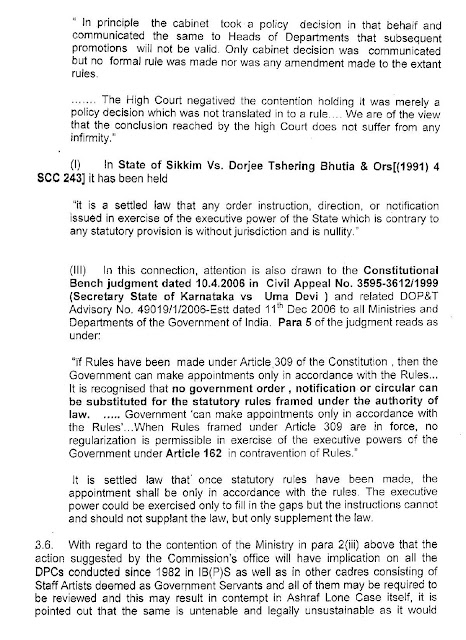 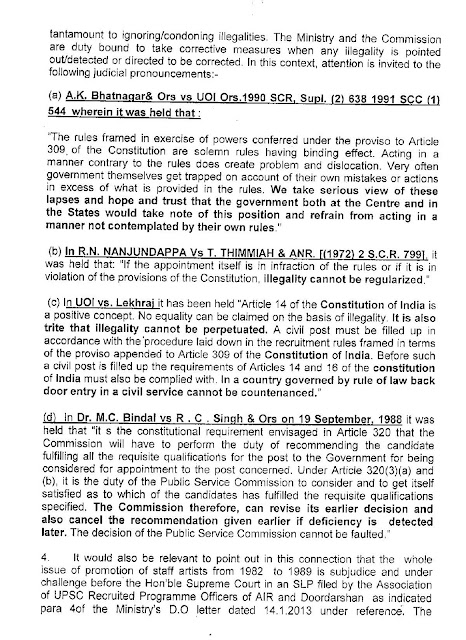 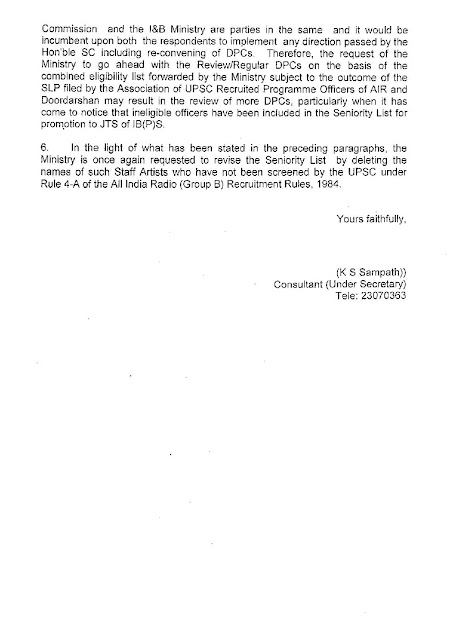 In a major blow to the Staff artists and the PSA  ,  the Supreme Court  on Thursday April 18th   dismissed an IA filed  by  erstwhile contractual Staff Artists to prevent the UPSC from    conducting  review DPC as per rules  (from 1990 onwards)  stating that their  plea had no merit. The Supreme Court also directed that the  UPSC  may  go ahead with the review DPC of JTS of the IBPS (on the lines planned by the UPSC) .

On behalf of the Staff Artists , Senior Counsel Venkatramani pleaded that  the UPSC was unnecessarily trying to reopen old issues  relating to seniority and eligibility which was no longer  warranted. The Supreme Court refused the  staff artists plea to prevent the UPSC from conducting the review DPC , and instead  directed the UPSC to   go ahead with  the Review DPC .  The review will be subject to the outcome of AUPO's  Ashraf Lone review DPC case pending before the Supreme Court for the earlier period (1982-1989) . Senior Counsel , Colin Gonsalves, appeared for AUPO. The SLP had been filed as an I.A in AUPO's Ashraf Lone review DPC Case.

Implications of the Supreme Court Order

1. Since the  Supreme Court while dismissing the SLP of the staff artists  states that the argument has no merits, the   Supreme Court order has  effectively negated all   arguments  raised by staff artists in  the SLP  . These are  the same arguments  put forth by  the Ministry of I&B ,  DG:AIR, The  PSA    to repeatedly block the   JTS review DPC case    granting   production posts of IBPS to the Pexs.


2.   Those  who have received illegal benefits  and promotions in IBPS Production cadre will have to  be reverted and their places given to  eligible UPSC recruited PEXS  -------( .The UPSC,   after  verification/scrutiny  of  its records has  been repeatedly pointing  out to the Ministry of  I&B and DG:AIR that  many non eligible contractual  persons  have been  wrongly promoted  to the IBPS   at the cost of  eligible UPSC recruited Programme Executives)

4. Removal of illegal entrants  from  the programme executive cadre  who do not figure in upsc  screening records----------------. Only those who had been screened and found suitable  by UPSC  can  figure in the eligibility lists as per rules and as per specific  directions of the Supreme Court in the Satish Chandra Mathur judgment.    UPSC has desired that all those who were not screened by UPSC will have to be removed from the eligibility lists .
.
4. The  Supreme Court direction  ensures that the Ministry/Department cannot hold up the  JTS  of IBPS review DPC ordered by  CAT nine years ago on 26.3.2004 - any longer.

To strengthen AUPO legal fund,"ALL AUPO MEMBERS INCLUDING RETIRED PERSONS MUST IMMEDIATELY RUSH CONTRIBUTIONS FOR THE ASHRAF LONE SUPREME COURT CASE.
Posted by AUPO at 12:26 AM No comments:

The undersigned is directed to say that as per the extant policy of the Government, all posts are to be filled in accordance with provisions of the applicable Recruitment Rules/Service Rules. As explained in this Department’s O.M. No.28036/8/87-Estt.(D) dated 30.03.1988 read with O.M. No.28036/1/2001-Estt.(D) dated 23.07.2001, promotions/ appointments on ad- hoc basis are to be resorted to only in exceptional circumstances mentioned therein, to a post which cannot be kept vacant in consideration of its functional/operational requirement. In spite of these express provisions, it has come to the notice of this Department that the Ministries/Departments are resorting to ad-hoc arrangements in total disregard to the statutory provisions/instructions on the subject as well as proper manpower management and career advancement of the employees.

2. This Department has been impressing upon all the Ministries/ Departments from time to time to take adequate steps in advance so as to achieve the desired objective of timely convening of the Departmental Promotion Committee (DPC) meetings and preparing the approved select panels for regular appointments/promotions within the prescribed time limits. However, at many a time, due to non-adherence to the prescribed norms and procedures by the Ministries/Departments, the approved select panel is not ready in time and ad-hoc arrangements are resorted to. Some Ministries/Departments have taken non-acceptance of their incomplete proposals for DPCs, by the UPSC, as the reason for resorting to ad-hoc appointments. In this regard, as already emphasized in this Department’s

O.M. No.22011/3/2011-Estt.(D) dated 24.03.2011, it is reiterated that the responsibility of sending the DPC proposals, complete in all respect, to the UPSC, lies entirely on the administrative Ministries/ Departments concerned.

4. Ad-hoc appointments/promotions should be made only in rare cases and for exigencies of work, where the post cannot be kept vacant until regular candidate becomes available. Persons appointed on ad-hoc basis to a grade are to be replaced by persons approved for regular appointment by direct recruitment, promotion or deputation, as the case may be, at the earliest opportunity. As already provided in this Department’s O.M. No.28036/1/2001- Estt.(D) dated 23.07.2001, no appointment shall be made on ad-hoc basis by direct recruitment from open market. Where the vacant post cannot be kept vacant for functional considerations, efforts are required to be made to entrust the additional charge of the post to a serving officer under provisions of FR-49, failing which only appointment by ad-hoc promotion/ad-hoc deputation is to be considered in terms of provisions of this Department’s O.M. No.28036/8/87-Estt.(D) dated 30.03.1988.

5. As already provided in this Department’s O.M. No.22011/3/75-Estt.(D) dated 29th October, 1975, and reiterated in O.M. No.28036/8/87-Estt.(D) dated 30.03.1988 and O.M. No.28036/1/2001-Estt.(D) dated 23.07.2001, an ad-hoc appointment does not bestow on the person a claim for regular appointment and the service rendered on ad-hoc basis in the grade concerned also does not count for the purpose of seniority in that grade and for eligibility for promotion to the next higher grade. As per existing provisions, these facts are to be clearly spelt out in the orders of the ad-hoc promotions/ ad-hoc appointments. Therefore, such ad-hoc arrangements are neither in the interest of the individuals nor the organizations concerned. It is, thus, not appropriate to resort to ad-hoc arrangements in a routine manner.

7. This Department vide O.M. No.39036/02/2007- Estt.(B) dated 14.11.2008, has requested all the Ministries/ Departments to comply with the regulation-4 of the UPSC (Exemption from Consultation) Regulations, 1958, which provide that if a temporary or officiating arrangement made by ad-hoc appointment to a post falling within the purview of UPSC is likely to continue for a period of more than one year from the date of appointment, the Commission shall immediately be consulted in regard to filling up of the post. For this purpose, the Ministries/Departments are required to furnish monthly and six-monthly returns to the Commission showing all such Group ‘A’ and S’

Gazetted appointments and promotions made without reference to the Commission, as emphasized in this Department’s OM No. 39021/1/94-Estt.(B) dated 22.07.1994. These instructions are again reiterated and all the Ministries/Departments are requested to ensure that requisite returns are furnished to the Union Public Service Commission as per the time schedule prescribed so as to effectively monitor the ad-hoc appointments being resorted to by various Ministries/Departments without consulting the UPSC.

8. All the administrative Ministries/Departments are requested to review the ad-hoc appointments/promotions made by them, from time to time, and at least once a year, on the basis of the guidelines and instructions in force, so as to bring down the instances of such ad-hoc manpower arrangements to the barest minimum, in respect of both Secretariat as well as non-Secretariat offices under them.

(Pushpender Kumar)
Under Secretary to the Government of India
Posted by AUPO at 9:23 PM No comments: